The late seventies/early eighties was a time of great excitement and innovation in Formula One. Downforce was the aim of the game and teams were experimenting with skirts, wings and underbodies to try to get as much downforce as possible.

Before carbon fibre was used in Formula One the car’s monocoques were constructed from single skin aluminium sheet and/or aluminium honeycomb sheet, which would be fabricated into complex shapes.

In 1978 the Lotus 79 had been so fast compared to its competitors that the driver’s could afford to not push it too hard, yet still win. However, when the Lotus 80 proved troublesome in 1979 Lotus went back to the 79, although now the competition had not only caught up, they had passed them by, meaning the drivers found themselves having to push the cars a lot harder than the previous year to keep up with their competitors. When Lotus were forced to push the cars harder and started to run stiffer springs (amongst other things), suspension mounting brackets on the gearbox started breaking as they were having to deal with greater downforce and greater loads than had been the case previously. However, solving one problem inevitably created a new problem, shifting to the next weakest part on the car.

For 1980 a new model was created based on the Lotus 80 monocoque, new aerodynamics and new gearbox, which became the Lotus 81. The escalating requirement for ever stiffer road springs led to a new problem for all teams where the drivers were suffering serious back pain as a result of the hard ride, and this led to the quest for a solution.

Always wanting his cars to be as light as possible, Chapman had fabricated the type 79 and 80 Lotus monocques from a single skin aluminium sheet which, as the team were to find out to their cost, was not up to the torsional strength required for the job, particularly as cornering speeds increased as loads generated from the more efficient underbody and skirts systems also increased. Some other teams such as Williams in particular, were using aluminium-honeycomb which offered more stiffness and a better structure.

The Lotus 81 initially suffered from poor structural integrity, but with a lot of encouragement and suggestion from race engineer Nigel Stroud, the monocoques were completely stripped mid season and rebuilt with additional strengthening so that by the last races of 1980 the type 81 had become very competitive. 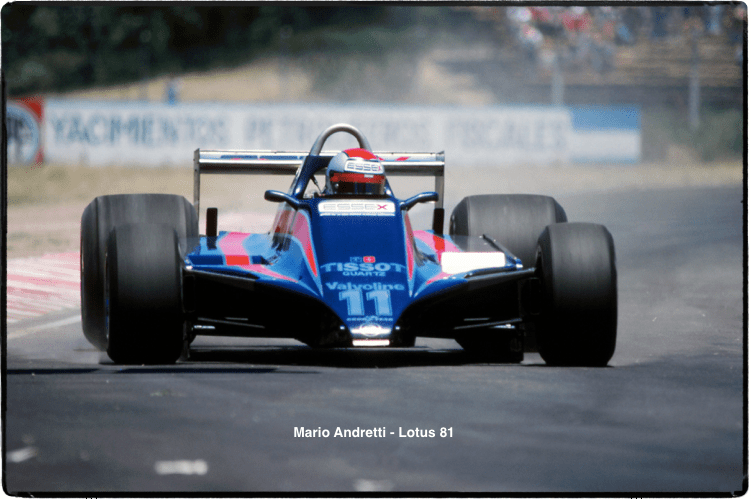 But Chapman already had his eye on his next big innovation where the springing requirements for aerodynamics and ride would be separated, so that the driver would no longer be subjected to a severe battering from the rough ride.

For Lotus the last race of the 1980 season at Watkins Glen signaled the death knell of the aluminium chassis construction previously employed by so many teams, as half way through the race while running a strong fourth, Elio de Angleis began to fall back due to deteriorating handling producing more and more understeer. On return to the factory when the monocques were stripped it was found that they had again started to fail structurally.

Meanwhile the Team built a full prototype ground effect car with an aluminium monocoque, sliding skirts, a long curved underbody and two chassis, which became the Lotus 86. Essentially it was like having a bottle with a smaller bottle inside it. The outer chassis (body) picked up directly on the wheel uprights on soft springs which quickly became solid, while the monocoque chassis that the driver sat in, was attached to the engine and gearbox and sat on normal road springs in the region of 600 to 800 lbs. So the driver was in a nice comfortable environment while all the aerodynamic loads were effectively transmitted directly to the tyres, giving the car a tremendous level of grip.

The type 86 was tested by Nigel Mansell in Jarama at the end of 1980 and it was phenomenal. With these test results it was full speed ahead on a double chassis, carbon fibre monocoque car for the 1981 season which would become the Lotus 88.

But then the FISA changed the rules, banning sliding skirts. However, this didn’t deter Chapman from building the car with the twin chassis, in fact he believe it could still have an advantage .

The obvious thing for most, in their quest for a stiffer chassis, was to progress to aluminium honeycomb construction, but recognising that there had to be a change, Chapman demanded an immediate leap in construction technology to carbon fibre, done in house, and without any impact on the completion date of the new “double-chassis” car.

While the Team were designing and building the twin chassis car in October of 1980, the ‘Old Man’ (as Chapman was affectionately known by team members), knowing that they needed to improve the stiffness of the chassis, suddenly decided if they were going to do a new car, it had to have a carbon fibre chassis. This had never been done in Formula One or any form of racing up to this point, even the aircraft industry were not very advanced in such technology. The Team had the deadline of 22 February 1981 to complete the car for that year, but that was based on building an aluminium chassis, albeit upgraded to aluminium honeycombe.

When my father  suggested that the time frame was too short for such a design change with so much new technology, Chapman said “No, that’s got to be the finish date. And we need to make sure the car is safe.” My father insisted that it was going to be too much work for the boys in the workshop, to which the Old Man replied “The race waits for no one! You’ve got to get it done.” His philosophy was always; “You’re not running late, you just didn’t start early enough.”

Considereing there were less than seventy people in the whole team when my father joined Team Lotus, including my father, Nigel Bennet (race engineer) and legendary chief mechanic Bob Dance, they had some serious work to do! Quite the contrast to the size and capability of a modern Formula One Team!

Without any change to the new car deadline,  the Team prepared carbon fibre nose box test pieces and took them to Lotus Cars for testing. You’re probably imagining some kind of pulley system with a full car on rails being accelerated towards a wall. Well imagine this; a tower, maybe fifteen metre high, a 100kg block of cement, a carbon fibre nose box bolted to the ground on an unused part of the Hethel Airfield, and the concrete block being dropped onto the nose box from the top of the tower. Not quite the sophisticated crash testing you see today! But it was very effective, it clearly illustrated the benefits of the composite structure and provided the necessary calculated results and confidence to push forward with the carbon fibre monocoque.

These tests also allowed the Team to measure the deformation and see what combination of carbon fibre and Kevlar they needed to use. People were of the opinion that carbon fibre was a risk because, although strong, it was brittle and thought to shatter too easily, so Lotus combined it with Kevlar to make a carbon Kevlar weave. The carbon fibre would provide the strength and torsional stiffness and the Kevlar would give it the tear strength.  The result was two carbon fibre Kevlar skins with Nomex honeycomb (like a fire proof paper) sandwiched between them, which gave a very strong, stable structure.

Chapman had told the boys that along with building a completely new car from new materials it also had to look the part. He didn’t want it to look like a bit of wet lay-up fiberglass, what he referred to as paint brush engineering. So to create a smooth finish they vacuumed the carbon fibre/Kevlar and honeycomb onto a very large sheet of thick glass to achieve a smooth flat finish, and then part heat cured it. Then from the large sheet of carbon fibre honeycomb, fold lines were routed into it, before being folded around four machined aluminium bulkheads to create the monocoque shell. 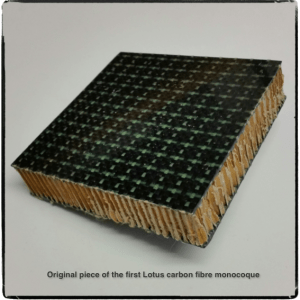 All of this was done with only a two day delay from the original build schedule which had been laid down months earlier. The boys in the composite shop were incredible, for two months they worked twenty-four hours a day in shifts, three lots of people would work through the night to make sure not a minute was lost. In three and a half months Lotus had essentially designed and built Formula One’s first carbon fibre monocque.

The Lotus 88 made its public debut at the Paul Ricard circuit on March 3rd, 1981 and was the first carbon fibre monocoque car to ever run.

Just as Chapman’s Lotus 25 had changed the concept of chassis construction, so too did the advent of carbon-fibre monocoques.

The original 87/88 monocoque became the backbone of the Team’s cars for the next five years as after providing excellent service in 1981 and 1982, it then provided the basis for the Gerard Ducarouge Turbo Renault car that rescued the team’s flagging fortunes in 1984. 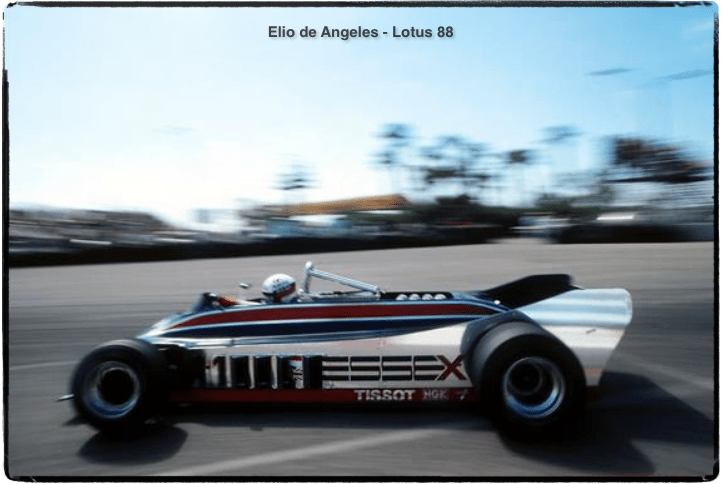 You may be wondering what happened to the Lotus 87? Or how well the Lotus 88 performed in 1981?  Subscribe to the blog for the next instalment and much more!