I’d like to start by saying I do not currently possess a Formula One Super License, nor have I previously, nor will I ever have one. So although I don’t feel that I am adequately qualified to comment on the driving skills of those who are in possession of an F1 Super License and have made it to the ultimate echelon of motorsport, I wanted to write about a driver that I feel is being unfairly judged, criticised (almost trolled), with even a website dedicated to his previous mistakes.

I have grown up in motorsport, followed my father around the world while he worked in every formula from karting right to the top; and I’m lucky enough to now work alongside him while he attempts to pass on some of the wealth of knowledge and experience he has gained over the years. I have lived and breathed racing for the past five years, sat in debriefs, video analysis sessions, and simulator training; so perhaps I have a small idea of what it is all about.

Any driver that has the opportunity to sit in an F1 car, be it for one test session or a full race season, has got there for a reason. They have a higher than average level of talent. Of course there are always going to be some who are more talented than others, but it does not change the fact that talent got them there. The argument will come up that they are there purely because of money, but you wouldn’t take a Billionaire who had never raced and put him in an extremely powerful racing car just because he had paid. Sure it’s probably given them an advantage over another talented (possibly more so) driver, but they still earned that Super License.

Pastor Maldonado IS a talented and extremely brave racing driver. He may have been over enthusiastic when he arrived in Formula One, been involved in some big accidents and gained a bad reputation, but he is not the first. Has anyone really given him the credit he deserves this season? Eight races in and he’s only had one accident that was not his fault. When his Lotus hasn’t suffered from reliability issues, he’s finished in the points and been in a position to score more points when his Lotus has let him down. It is no coincidence that he excels at Monaco, and has done so in all categories, a circuit that requires the greatest precision and accuracy, and is one of the most challenging of a driver’s bravery.

I am tired of seeing tweets from “Monday morning quarterbacks” who think it’s funny to continuously belittle him. The worst example of this trolling was an article in a major UK newspaper asking if F1 had become “too easy” because Maldonado hadn’t crashed this season. The journalist even says one of his favourite websites is “Has Maldonado Crashed Today”. Surely this begs the questions: what level of journalism is required to publish such an article? What makes you an expert?

Why have people continued to pick on Maldonado while conveniently forgetting about Romain Grosjean’s crash strewn early career, when he was given a race ban and €50,000 fine in 2012 for his over optimistic passing efforts at the start of the 2012 Belgian GP? Today many sing Grosjean’s praises as an established star. If that’s the case then Maldonado deserves every bit as much credit for his performances. On that basis either Maldonado is a real talent just as Grosjean is feted, or Grosjean is not the talent he is praised to be. Given a direct comparison in the same team and cars, they are either both great or both not deserving of their position in F1. You simply can’t apply different rationale and standards to suit a particular bias or the tidal wave of popular opinion. Judgment on a driver should be based solely on cockpit talent – their on-track performance; not perceived personality, popular opinion, nationality or appearance. It should come down to what they do in the car. The rest of it is irrelevant. 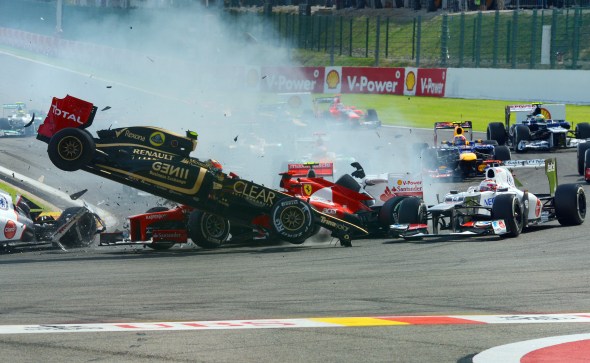 So everyone should just lay off Pastor Maldonado, because he does have an F1 Super License, he’s talented, brave, and he deserves it; he also seems to have the respect of his peers, who are in the best position of all to judge. How would you feel if you were being continuously disparaged in a public forum for a job you’re totally committed to and focused on? Plus he’s actually a very nice guy.