In the midst of the Lotus Type 88 saga, and having squeezed in some extra testing while in the States, the Team took a well deserve two days break upon their arrival in Brazil ahead of the second round of the Championship.

Staying just outside Rio de Janeiro at the beachfront Intercontinental Hotel, and badly in need of a little “R&R” my father took to the beach with Lotus drivers Elio de Angelis, Nigel Mansell, Rosanne (Nigel’s wife) and Peter Wright. Having grown up in Sydney and being a confident swimmer, my father didn’t hesitate in taking to the water for a dip.

There was little information in those days for tourists visiting Brazil and little did he know that the waters in that area were very treacherous. There were no signs on the beach, no flags to stay between and no lifeguards. Without any obvious warnings my father swam out a fair way to catch some waves and bodysurf back to shore. Having tried to catch a couple of waves and gone backwards, he quickly realised he was in trouble and was being pulled further out by a very strong rip.

Nigel and Rosanne had been splashing around in the surf a little but had not ventured any further than knee deep into the sea. Having realised the rips were quite strong and the waves were starting to pull them further into the sea, they decided to go back to the beach. They turned to look for my father as they left the water, when they saw him waving about fifty yards away.

My father’s first waves for help just got friendly return waves from his friends back on the beach. Having not got the response he needed, he began waving more frantically, and was relieved when he saw he had caught Nigel’s and Rosanne’s attention. Nigel, without a second thought or taking into consideration his own safety dashed into the water swimming out to help my father. Elio could also see my father was in trouble and followed Nigel into the surf.

Nigel was incredibly strong and fit, he had worked hard to regain his strength having had two big accidents in the lower formula when he had broken his back in one accident and his neck in another.

Nigel reached my father first, and got an arm under him to help him fight against the rip. Elio soon arrived and grabbed my father from the other side, but just as they were making some progress Elio got caught in the rip himself and was pulled away. Nigel could see my father was struggling and told him to fight, and began to drag him back to shore with his arm around his neck. All my father could see was the ocean, with no idea how far they were from the beach. By this time my father had been in the water for a good fifteen minutes, and despite their progress my father’s fatigue was starting to get the best of him. Nigel was urging him on, “Kick! Kick you bastard”. Just as Nigel thought they weren’t going to make it, a couple of large waves crashed over them and my father got a mouthful of water and went under. He had reached the point where he had just about given up, but as they both went under they felt their feet brush the sand, Nigel was yelling to my father to take breaths between waves. Having escaped the rip the waves were now propelling them to shore, aided by the small amount of traction from the sand.

Nigel could see a line of people had formed on the beach, making a chain to pull them out. As Nigel and my father made it onto the beach, Rosanne rushed towards them and tended to my father and told Nigel that Elio was still out in the surf. Despite his exhaustion and coughing from swallowing some seawater on the way back to the beach, Nigel headed back towards the water to help his teammate. As he was just about to go in, he was relieved to see Elio had managed to escape the rip and was heading back to the beach.

It’s clear for me to see why Murray Walker once said; “Nigel has more guts and determination than any ten men.” Of that there is no doubt.

Upon their return to the Hotel, the group learned of an Italian Formula One Journalist who had not been so fortunate and drowned along the same strip of water within hours of my father’s brush with death. Within a twenty-four hour period of my father’s drama another five people had drowned.

Nigel was in no doubt of how lucky they had been to survive as he told me, “It’s a day I shall never forget! … It was the worst situation I had ever put myself in, and the most terrifying!”

On returning to the hotel and asking at reception for the house doctor after explaining that they needed a check over as they had just survived drowning, the receptionist looked shocked and mentioned, as if it were common knowledge, that it can be quite dangerous to swim at that beach. When my father asked why guests were not made more aware, the receptionist pointed to a six by four inch sign on the rear wall of reception with a rather vague warning, “Beware. It can be dangerous to swim in the ocean”!

Later that night in reception, when my father came down for dinner, Williams’ driver Alan Jones walked over and asked, “Where’s Nige?” My father replied that he wasn’t sure and inquired if he needed to see him. Jones quipped with a chuckle, “Yeah, I need to give him a bollocking for pulling you out of the water!”

Not wanting to worry my pregnant mother who was away on holiday, he failed to mention the event when they spoke on the phone. Little did he realise the drama would make the papers, and my mother was most distressed when she returned to England and learned from a well-known tabloid he had almost drowned!

In 1989 my father was invited as a guest on the British television show This Is Your Life tribute to Nigel, to tell the story of how Nigel had saved his life in Brazil; it also gave him the opportunity to publicly thank Nigel for saving his life. Although his version of the events made it sound a lot less dramatic, as you can see towards the end of the video! (PC entrance at 22.01) 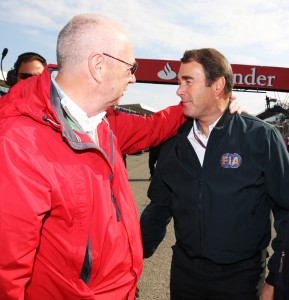 My father is in no doubt that he would have drowned if Nigel hadn’t been there to rescue him. The fraught experience is one of those events in life that creates a bond between people, which exists between them to this day.

My father said; “Until I felt my toes in the sand, I had given up and accepted drowning. Thoughts flashed through my mind of never seeing Jane again, a child growing up without a father, and amusingly that ‘The Old Man’ (Chapman) would murder me for having got Nigel killed.”

And if it’s not already obvious, I’m eternally grateful to Nigel for making sure I had a dad. Thank you.

This Is Your Life – Nigel Mansell par © Samantha Collins.  This article may not be copied or distributed in part or in whole without the consent of the author.
Images © Sutton Images