Victory for Lando Norris in the final race of the 2016 Toyota Racing Series, in New Zealand, and in the Series, is the result of an intensive career path that has seen the young British driver pack the maximum experience into the minimum time.

Norris has prepared well since graduating to cars, with a dual campaign in the 2015 British MSA Formula and the German ADAC Formula 4 Championship. The double activity gave him thirty MSA races and multiple rounds in German Formula 4 races, as well a great deal of testing which meant there were very few weeks when he wasn’t in a race car.

He has put that saturated experience to good use in the Toyota Racing Series that has served as an extension for his motorsport development. 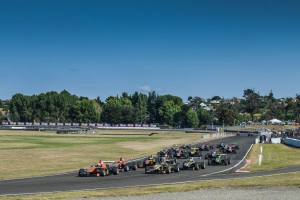 Norris is a deserving TRS winner with six victories and has clearly demonstrated the value of forward planning in the early stages with a strategic career goal. This is an admirable approach, but comes with very significant cost and is not possible for all aspiring young drivers. Unfortunately, in some cases it also comes at the expense of education.

Another excellent TRS performance to be acknowledged and deserving of respect, was that of local driver Brendon Leitch who only managed to get a budget together for the series at the last moment, yet turned in a polished performance over the 16 races to finish third in the series, just behind second placed Force India Junior Jehan Daruvala.

Brendon’s last real race was in February 2015 in the final round of the 2015 Toyota Series, in stark contrast to all the leading visiting drivers including Norris, Daruvala, Pedro Piquet, Artem Markelov and Ferdinand Habsburg, who have raced intensively throughout the European summer.

Brendon’s elder brother, Damon was a multiple race winner and leading series contender in past years, which saw him compete against and beat many highly rated drivers who have gone on to establish high profile professional careers. 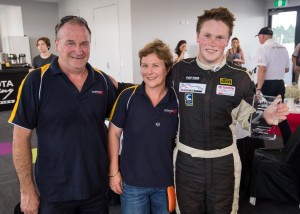 The Leitch family are dedicated motorsport enthusiasts and work hard to put their budgets together with commercial support from local businesses. Competing for the two boys has always been a family activity with active involvement in the running of the cars from father Barrie, and enthusiastic support from their mother, Marguerite.

In the tradition of New Zealand motorsport and the paths trod by Bruce McLaren, Chris Amon and many others, the two Leitch boys did not hesitate to pitch their skills against better-funded, more experienced drivers.

It must not be underestimated how much of a disadvantage it is for any driver to step in cold against race ready opponents, who are fully up to speed and have had extensive recent race experience.

Unfortunately, the Toyota Racing Series cars are not available in advance of the start of the series for those locals taking on the internationals and there are few other relevant car options available for them to use to get up to speed.

In this context the results achieved by all the local drivers are to be commended.

Brendon’s 2016 performances became stronger as the series progressed, with his win in Race two in the final weekend at Manfeild, and a very strong third place in the series, an excellent achievement and totally deserved. 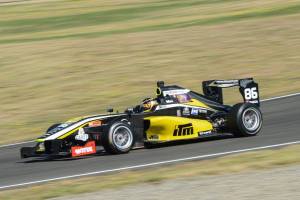 The Leitch family are passionate motorsport fans whose motorsport roots go back generations and they represent the true desire and fabric of grass-root motorsport enthusiasts who are there to compete against all-comers regardless of the odds.

For the future and strength of motorsport, it is essential that the sport continues to attract competitors such as the Leitch family, with the passion and desire to compete, and not only wealthy, trophy hunters aspiring to succeed for celebrity and financial gain.

© Peter Collins.  This article may not be copied or distributed in part or in whole without the consent of the author.
Photo credit – Bruce Jenkins / Toyota Racing Series

3 thoughts on “The Real Fabric of Motorsport”